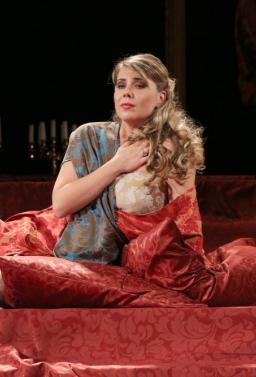 Opera in three acts in Italian language with Slovak supertitles

The inspiration for creation of the opera Tosca was a fantastic performance by actress Sarah Bernahardt in Sardou's drama La Tosca. Puccini was so fascinated by her acting that he set out to create an opera of the same name. Finally, an impressive work was created, which had its premiere on 14th January 1900 at the Teatro Costanzi in Rome. His story is a war drama, set in Italy in 1800 during the Napoleonic battles against Austria. Although the opera is at first glance a political drama, in fact it is a struggle between love and betrayal. Despite initial concerns, Tosca was received very well: Te Deum at the end of the first act had to be repeated because of unrelenting applause. Tosca's main aria Vissi d´arte had to be repeated in the second act, as was E lucevan le stelle or a loving duet at the end. Tosca is still one of the most popular opera titles in the world today.