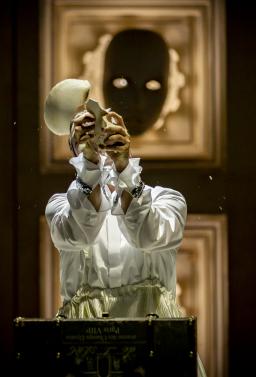 The veristic double bill Cavalleria rusticana (1890) and Pagliacci (1892) belongs to the gold fund of the world opera. Both works are representatives of the opera current, which engulfed the world at the end of the 19th century, also thanks to the faithful depiction of human emotions, passions, instincts, jealousy or fear. History has shown that the extraordinary musical and philosophical content of these works still appeals to the audience with its vitality, thematic timelessness and captivating music. Despite predictions about the short-term fashion of the works, today veristic works belong to the most visited across large and small opera scenes. Except music that draws the listener into his emotion, there are stories before the viewer's eyes that can be the life of any of us: Although the young and beautiful Lola is married, she does not intend to give up her ex-boyfriend. This love affair makes the main actors happy and unhappy at the same time. Tradition and destiny come into play – Turrida, according to an ancient custom has to pay her husband for her love with her own blood. The story based on real events served Pietro Mascagni to compose the opera Cavalleria rusticana, which was a colossal success right after the premiere. Two years later, Ruggero Leoncavallo experienced the same rapture with the premiere of his two-act opera Pagliacci. Its story is in many ways similar to Cavalleria rusticana: the essence is the tragedy of an aging actor who takes bloodily revenge on his young unfaithful wife and his rival. The model of the libretto was again a real criminal case, which was judged by his father who was a judge. Cavalleria rusticana and Pagliacci were performed for the first time in one evening in Metropolitan Opera in New York in 1893. Since then, these works have formed an inseparable couple. For the fourth time in its history, the State Opera continues this tradition.