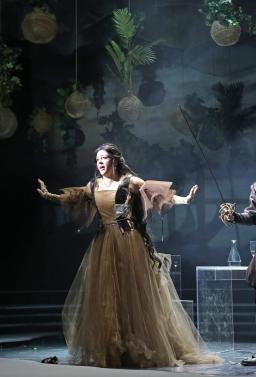 Otello is a brilliant work of early Romanesque Italian opera from 1816, based on a French adaptation of Shakespeare's drama of the same name. Since the composer Gioacchino Rossini nor the librettist Francesco Beria di Salsa have never seen the original English drama, the story of the work unfolds differently from how the Elizabethan playwright actually wrote it. We move from Cyprus to Venice, several characters have a changed character and different representation in the story, which is quite schematic: two tenors compete for the hand of a prima donna. Otello was initially not received positively in the English-speaking world - the English poet Lord Byron even wrote in 1818: They persecuted Otello up to the opera and crucified him. The score is a real lottery bet - get six tenors, soprano, mezzo-soprano and bass. Despite such critical remarks, Otello achieved fame, even world fame. Verdi himself approached this work with great respect a few decades later when composing his own Otello (premiere in 1887), because he realized that his work would be critically compared to Rossini. The fact that Verdi's Otello passed through the sieve of time successfully does not change the fact that Rossini's Otello represents a significant milestone in the development of musical drama in the 19th century. At the same time, it belongs to the key works, thanks to which the so-called the Rossini Renaissance begun, which means the rediscovery of unknown works by this great composer. In fact, it persists to these days, and the State Opera joins it by staging this magnificent work of world opera literature.

This production from 2019 is historically the first in Slovakia. The work was presented as a title of exclusive singing qualities of its performers, which was also highly praised by professional critics. Chinese tenor Zi Zhao-Guo and young Slovak soprano Mariana Hochelová perform their life performances in extremely demanding vocal parts. The work was musically adapted and conducted by Marián Vach, directed by Andrea Hlinková, costumes by Boris Haneček, stage set by Miriam Struhárová.