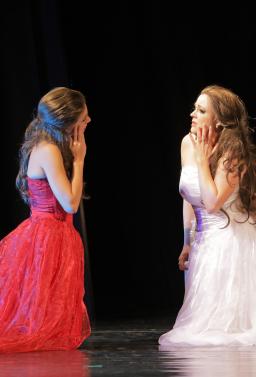 An opera based on the world-famous novel by Alexander Dumas The Lady with the Camellias. La Traviata (loosely translated as stray, lost, the one who lose its way) is one of the most famous works of the Italian opera luminary Giuseppe Verdi (1813 - 1901). The work was based on a libretto by Francesco Maria Piave, who was inspired by the well-known work of Alexander Dumas Jr. (1824 - 1895) The Lady with the Camellias.

The inspiration for the novel and the opera was a real person, the famous Parisian courtesan Marie Duplessis. Her name was changed in the novel to Marguerite Gautier and in the opera to Violetta Valéry. The composer was thrilled with The Lady with the Camellias. The story and the location where it took place were close to him - after all, it was somehow reminding him of his own life: he maintained an "illegal" relationship with a close friend and performer of his early works, soprano Giuseppina Strepponi, from 1847 until her death. The premiere of the opera took place in the La Fenice Theatre in Venice on March 6, 1853 and it was a fiasco. It failed completely - probably also because the main character was played by a courtesan, who was supposed to arouse sympathy and compassion.

No one, not even Verdi himself, seemed to believe at the time that one of the greatest evergreens of opera literature had been born. This was confirmed by further study of the work in 1854. After Il Trovatore and Rigoletto, La Traviata became the last of Verdi's three distinctive works of the 1850s. A romantic opera with a tragic ending is a beautifully told love story - it still appeals to audiences around the world. The State Opera returns to this work again with a musical adaptation by Lorenzo Tazzieri and director Dana Dinková.